I'm stuck solving a gnarly problem right now, so I thought I'd switch gears and write about a recent win in Bagel's design/implementation that I'm really excited about.

Working with foreign data (from a fetch call, for example) is a common pain-point in TypeScript and many other statically-typed languages: the compiler can't know what it's working with ahead of time, so it can't verify that your code uses it correctly.

There are a few different ways to deal with this:

The third option is both safe and ergonomic for the code downstream. But it can also be a pain:

Elm and io-ts are examples of this sort of thing. Rust's Serde is too, though it's an outlier because it uses macros to automatically generate decoders from your regular types.

Bagel's main usecases - UIs, web servers, scripts - are IO-heavy, so Bagel needed a great story for working with foreign values. Here's what I came up with: 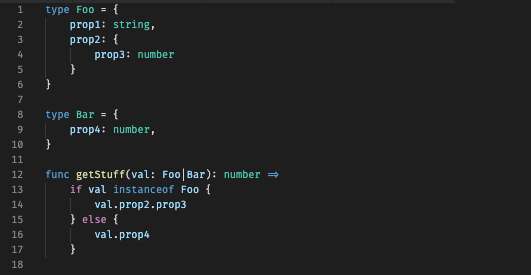 Like TypeScript, Bagel has type refinement ("if some check has been performed on value X for some section of code, change its type in that context to reflect what values could possibly have made it there"). But TypeScript makes a point not to add runtime behaviors on top of JavaScript, so if you want to refine a value's type, you're limited to checks JavaScript already knows how to make:

etc. These are well and good, but they don't work for more complex types. instanceof, in particular, only works for class instances and "exotic" objects, because JavaScript isn't digging in and comparing the types structurally, it's just checking the constructor associated with the object. Interfaces/plain object types don't have an associated constructor; JavaScript has no concept of them at all. And TypeScript doesn't create a runtime concept of it, because it wants to stay out of your runtime logic.

Bagel on the other hand doesn't aim to adhere perfectly (only mostly!) to JavaScript semantics, so we can take some liberties here.

So in Bagel, any type can be used with instanceof.

There's no special decoder system, there are no schemas, there are just your usual types. Normally those types are compile-time-only like in TypeScript. But when you need to use them at runtime in an instanceof check, they become available at runtime as needed.

When instanceof is invoked, Bagel automatically generates a runtime representation of the type involved. Then, at runtime, it passes this type representation together with the value being checked into a function that walks through them together and checks to see if they match. This returns a boolean. But the compiler also knows, when it sees instanceof checks used in certain cases like a conditional, to use that information to refine the value's type at compile-time, allowing the value to be used within that code "as if" it matched the checked type, because it will only reach that code if it does.

This and async were two of the most important milestones holding Bagel back from being used for real apps, and I've now got a first implementation of each of those settled and working.

There are still things to do before I feel comfortable calling it a v0.1, but we're getting there. I've made a pair of little web apps - a classic todo app and a Pokemon-card search app - that both typecheck and build and run correctly. So that's exciting. These are available in the repo if you want to take a look.

As always thanks for your interest, and feel free to star the repo or send me an email with any questions or feedback! 🥯